X
This site uses cookies to provide and improve your shopping experience. If you want to benefit from this improved service, please opt-in.
More Info
Accept Cookies 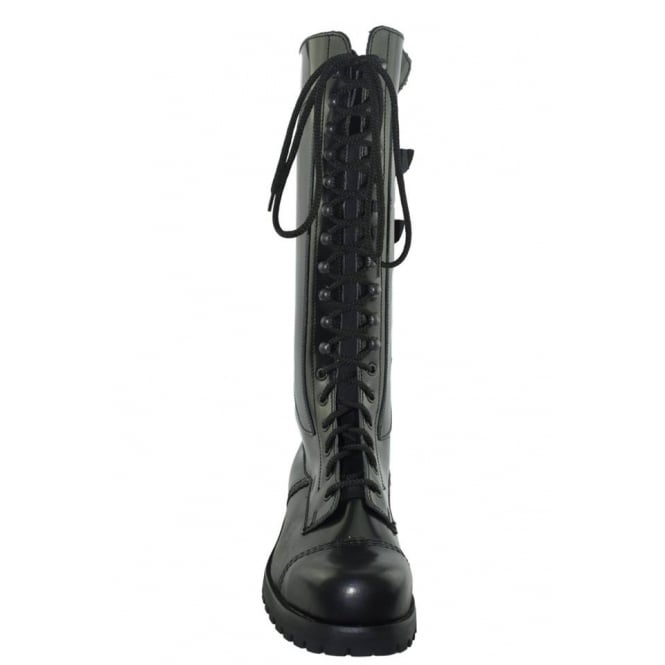 With the growth of heavy industry, thick-soled boots with reinforced toecaps were needed to protect the feet of workers in Britain’s factories and foundries, later becoming the footwear of the British army. Steel cap boots – with their metal cap exposed or concealed beneath the leather upper – became the footwear of the British working-class male. As skinheads emerged as a youth movement in the early 1960s, their working-class roots were reflected in their adoption of the steel-capped Boot.

By the 80s, skinhead style has become synonymous with football terrace hooliganism and violence. But as the decade approached its anarchic close, steel caps found favor with the punks, whose nihilism was matched by their ferocious creativity. As grunge emerged in America during the late 80s and 90s, steel caps returned on the feet of riot girls and then cyberpunks, before being picked up by fashion-forward kids in Tokyo’s Harajuku district. Durable as ever, the steel-capped boot remains the choice for the most uncompromising wearers with a new generation of customers embracing the steel cap for its authentic and distinctive silhouette.

Our Steel Cap footwear is produced to a very high standard and offers the wearer comfort and a degree of protection. However, our boots are tested in a street environment and have not been subjected to a test to check their compliance with safety standards. We cannot guarantee their performance in a situation that requires the use of footwear compliant with safety regulations.

We aim to dispatch your order SAME working day.

UK: Please allow 2-5 working days from confirmation of order for delivery. If you do not receive the parcel within this time please contact us.

Europe: Please allow up to 10 working days from confirmation of order for delivery.

Rest of the world: Please allow 10-15 working days from confirmation of order for delivery. Some countries can take longer.


Any taxes or duty fees incurred to ship abroad are the responsibility of the customer and these costs cannot be reclaimed from Aztec Fashion L.T.D.


How Are Your Items Delivered

UK: Your items will be sent using the Royal Mail parcel service. Larger orders will be shipped using DPD Couriers whereby a signature will be required. If you opt to use our paid for next day Royal Mail service then this also needs to be signed for on delivery.

International: The following countries will be delivered to using DHL Couriers; United States and Republic of Ireland.

We use DPD Couriers for Germany, France, Netherlands and Belgium. All remaining countries will be delivered to using the Royal Mail International Signed For service. Should a larger order be placed we will contact you directly to advise on shipping method.

Thank you for purchasing from us and supporting an independent business. If for any reason you are not happy with your unworn purchase you may return it to us in it's original packaging along with a copy of the invoice within 28 days for a full refund (postage fees will not be refunded).

PLEASE FOLLOW THE STEPS BELOW SHOULD YOU NEED TO RETURN YOUR ORDER:

Please DO NOT use packing tape or attach return labels on the shoe boxes, use wrapping paper or you can re-use our bag if it helps!. We can not resell the shoes if the box has been damaged removing tape or labels.

Returned items can take up to 7 working days to process and refund.

Returns postage will be refunded in the rare case of a wrongly sent or faulty item. (We try our best to minimise mistakes but any error will be rectified at no cost to the customer)

Worn items can not be returned unless clearly faulty. Please contact our customer services department first (details below) with details of the fault BEFORE sending them back to us. Items damaged by the customer will not be refunded.

Please use Royal Mail 2nd class recorded to return items from the UK. If any courier service is used, we will not be responsible for reimbursing any postage costs.
If returning items from outside of the UK please use a trackable service and make sure you fill in the customs form/waybill correctly, making sure you tick the box marked 'Returned Goods'. Failing to do so will incur Customs duty and VAT fees which will not be paid by us and subsequently the parcel will be returned to sender.

Should you wish to exchange your purchase for another size, colour or style, we would suggest purchasing again through the website whilst sending the unwanted item back for a refund. This way you can be sure to secure the correct pair you require as sometimes items required can be sold out by the time we receive your return for exchange.

28A POP IN COMMERCIAL CENTRE